Supporting the fight against fracking

Last week, a protester from the Preston New Road fracking site asked me if I would like to visit their camp, meet some of the other protesters and view the entrance to the fracking site and drilling rig, and perhaps give a speech to the assembled protesters.  I was pleased to accept and on Tuesday 15 August, my Office Manager and I spent a couple of hours up at Maple Farm and outside the gates of the fracking pad.  The fracking pad site is situated on the A583, Preston New Road, just five miles outside Blackpool and Lytham St Annes, and four miles from the small town of Kirkham.  Just 3 miles from this site is the picture postcard village of Wrea Green.  Around the site are various rural residences, a retirement park, farms and rural businesses.  Maple Farm is one such rural business which is threatened with closure by the fracking pad’s proximity.  Maple Farm is also the “nerve centre” for protesters and activists (protectors) alike, and has camp facilities for protesters.

When I arrived, as I got out of the car, I was immediately approached by BBC Radio York for an interview, before being greeted by representatives from different groups, including Frack Free Lancashire, Bolton Against Fracking (whom I have met before) and Don’t Frack Rivi.  It was good to see people from Bolton turning out to help with the protest at Preston New Road.  I was shown around the various marquees, where information documents are available to visitors, and information days are arranged for local residents on most Saturday mornings.  There was even a media centre and a self-service cafeteria in a polytunnel.

I was very impressed with how well the protest has been organised and documented.  They told me about their recent campaigning activities and showed me around Maple Farm Camp.  Those who are living at the camps receive donations of food and other commodities from members of the local community who are grateful for the support of the protesters who are defending their local environment, air and drinking water from the contamination this industry has brought to communities in the US and Australia.

After meeting the representatives of the various groups, we walked the half mile along the A583 to the site entrance, where there were many more protesters gathered on the pavement, with banners and drums. 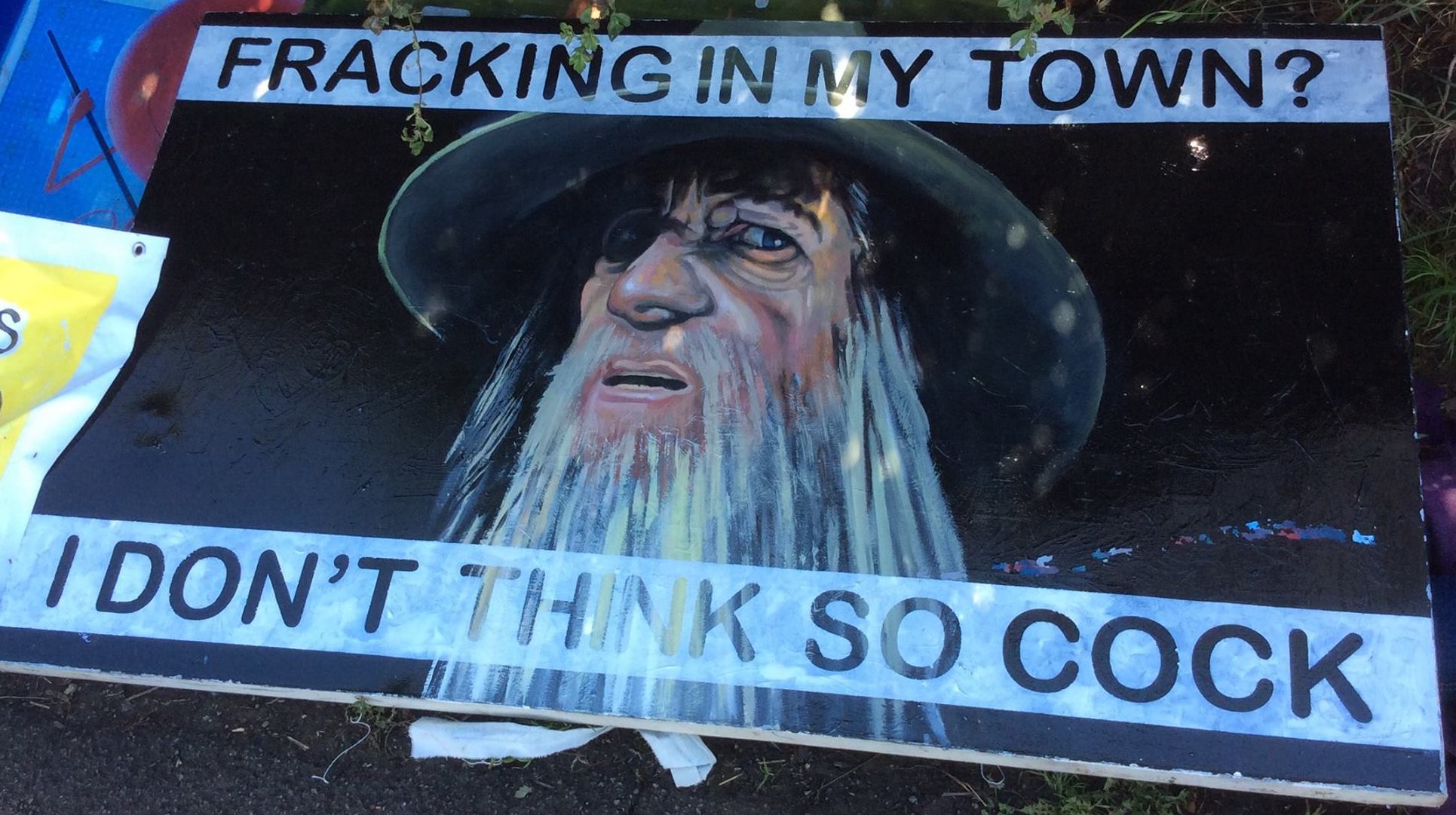 I was introduced to the Police Liaison Officer who arranged for a small group of us cross the road to the site entrance to view the drilling rig and take some photographs.  Two police vans were parked across the site entrance with police standing shoulder to shoulder between the vans.  Here, amongst the police, I was interviewed by Green Party representative Tina Rothery, who has been campaigning against fracking for many years.  Tina was the local Green Party candidate at the last election.  You can see a recording of the interview on Facebook here: https://www.facebook.com/tinalouiseuk/videos/10159190185900258/

I had conversations with many of the protesters who had come from all over the country, about why they were there and their fears for the environment.

I was happy to oblige when asked to give a short speech, and thanked the protesters for their work in raising awareness of the dangers of fracking and keeping up the pressure on Cuadrilla and the Government.

I was then asked if I would like to visit the New Hope camp, and we set off walking back towards the Maple Farm Camp.  As we approached, a couple of Police vans pulled up outside the farm and several Police Officers jumped out and began to herd the small number of protesters away from the roadside. We then saw this develop rapidly into an altercation between the Police and a couple of protesters, and we saw a young man in a red jumper lying on the ground, being held down by Police Officers.

I believe that it’s time that our Labour politicians did more to oppose fracking in Parliament, particularly as it is Labour Party policy.  They should show their support for peaceful protests against fracking whenever possible, and I would encourage concerned citizens to visit Maple Farm on a Saturday morning to talk to the protesters and pick up information leaflets.  I would certainly encourage Labour politicians to visit the Maple Farm and the site at Preston New Road each week as part of the #RedFriday campaign.

Yesterday, when Jeremy Corbyn was in Bolton, Logic, one of the protestors from Preston New Road, asked Jeremy if he would visit the camp at Preston New Road.  I was delighted when Jeremy said that he would, and we are now waiting for a date to be set.

You can view some more of the photographs from my visit on my Facebook page: https://www.facebook.com/pg/yasminqureshiuk/photos/?tab=album&album_id=1384858521637284

During my speech at Preston New Road, I wrongly stated that Cuadrilla is a French company.  I had mistakenly confused them with the company which carried out exploratory work at Barton Moss, IGas Energy, which, although also a British company, has received investment from French oil company Total.  Fracking has been banned in France since 2011.  Cuadrilla is actually a privately-owned British company based in Bamber Bridge, Lancashire.  It is 45% owned by an Australian company, AJ Lucas, and 45% by Riverstone Holdings, a multi-national private equity company based in New York.  The remaining 10% is owned by employees and former employees of Cuadrilla.